Related to user report and discussion in:

5 posts were merged into an existing topic: Rerouting changes the planned route 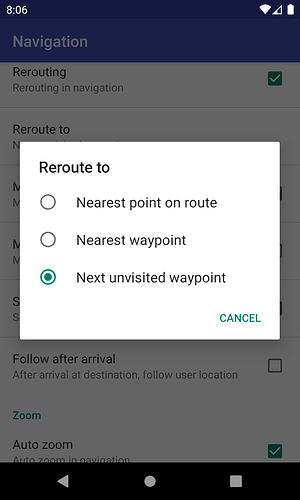 When is this available? Without such a function I am in agony using Kurviger on round trips, since rerouting destroys the planned route if you leave the planned route and skipping next waypoint even deletes the destination.

This would be a good 1st step until the planned definition of waypoints as mandatory or optional waypoints is available.

When is this available?

skipping next waypoint even deletes the destination.

Like mentioned already here, that is simply not true, destination cannot be deleted.

Again:
“Skip next waypoint just skips next via point (if exists), while destination remains always the same.”

A post was merged into an existing topic: Enhanced menu style (big buttons)

“Nearest point on route” does not play very nice in combination with “automatic recalculation”.
See this demonstration from @grua

Ok, that would be the behavior I would have expected, but my experience also was a different: I was driving this route https://kurv.gr/ZehtE Then I left it here: [image] The app started to create waypoints. Even when I was near the original route again, the automaticaly generated waypoints weren’t deleted any more. The app continued to navigate back to exactly the position, where I left the original route for the first time: [image] The red line is the original route. “Nächster Routenpun…

May I suggest to replace it with something different:
Let me call it “nearest point on route +500m”

Things are not so simple, a route segment may be some km in length, if it’s a straight line.
So nearest point in the middle of the line could be its start or end point, preferably the end.

Could need heavy interpolation checks so mode can be improved or removed, I will think it.

That’s why there are many rerouting modes, where should exist only “next”, like most apps.

Next version will have some light improvement for “nearest” rerouting option.

2 posts were merged into an existing topic: App: Waypoint types

5 posts were merged into an existing topic: Rerouting issues

A post was merged into an existing topic: Rerouting issues