From that point of view you’re of course absolutely right.

So full offline routing would for sure be a great

I can agree that this would be a great feature if the app itself can re-route (re-calculate the route) without internet access.

Hello,
this would be really great! I made some quite good expieriences with KurvigerPro for as long as an Internet Conection is available. But as leaving the original planned route is happening quite often (road closed, traffic situation, missed a turn and do not want to go back, …) rerouting is an essential feature of a navigaton system.
If I do have a decent internet connection this does work quite reliable for me with KurvigerPro.
Unfortunately there are situation when Internet is either not available or very slow.

One comment to “slow rerouting”. I was seeing this happening quite often in situations where a lot of turns are close to each other (mostly in cities). Then rerouting is too slow. I would assume a clever onboard rerouting (that does not try to re-route the whole trip, but only a smaller path in front) could be much faster and solve this issue.

For my next tour in Switzerland I will now test calimoto, as they can do offline rerouting. But the routes chosen seem to be a bit (not by far) worse than the ones from kurviger. I would like to be able to use Kurviger everywhere!

I am currently on a 4 days trip mainly in Switzerland and I am definitely missing the offline navigation.

As long as you are well prepared and have your route stored as kurviger file locally you can cover lot of situations.

I did by mistake add a new waypoint in offline mode and suddenly my whole route disappeared with a short hint offline routing isn’t possible.

Maybe a situation kurviger app can avoid and don’t let the user set a new waypoint or move an existing one while in offline mode. Not all users will have the kurviger file with them.

I understand that making a complete offline standalone app seems to be rather difficult… Muybe because you use the routines form google ?
I now have to give up with kurviger, which is really a pity beacise it was a really good software… But places I go have no internet or useless/too slow; And when SHTF, bettre have an apk and all maps already on a back up sd card. it’s a rather extreme situation and I’m aware that it will concern maybe 1% of riders. Sadly i’m in this this 1 %…

Rerouting on the way is another pb, as motorbike fast moving creates more route changes, especially in / around towns. and again, travelling, murphy’s law is still the same : no more 3 or 4g credit when needed, and good luck to find some providers, when you are in Kadikoy or Yaroslav at end afternoon…
Hope you will do a true offline version ASAP. Still convinced that you have a market for advriders, maybe not one million guys but sure enough ready to pay good price for your solution…

Currently routing in Kurviger is performed online via its own server (powered by GraphHopper online implementation).

But if want to test offline (fastest) routing can try Cruiser platform.
Create offline routing graphs in desktop Cruiser with data from Geofabrik, load the graph and route offline.

Perhaps a preview for the future…

Just tested it (created a graph for my homebase and working office area and opened it in the Cruiser app). Offline routing works perfect on my old Moto G (3rd Gen).

Would be a great thing to see that (based on the GraphHopper graphs) in the Kurviger app (even if it would be necessary to create my own graphs using a desktop app like Cruiser for the beginning).

Concerning Cruiser I have a question: what purpose is this app meant for? Why do you offer two different apps with some significant differences?

Regarding Cruiser platform, I created it some time ago to support Mapsforge and VTM vector map libraries and their community.

There are 2 different apps for each vector map engine separately.
Kurviger is based on newer Cruiser GL using internally OpenGL.

During my last long trip I tested once again my own behaviour of digital navigation.
And again I noticed, that I still combine Kurviger with (a) GMaps and (b) HERE.
Want to discuss both reasons here and in another topic.

In this topic: HERE.

See the screenshot below I took on my last trip:

I was in a hurry, but had to leave Kurviger’s route because of a detour in a small town.

So I got a bit desorientated, because 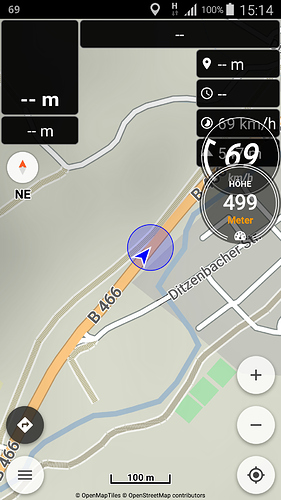 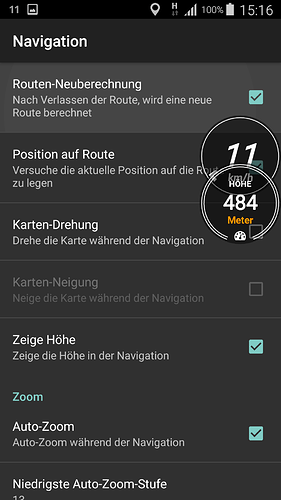 As an experienced user I could imagine, that connection to Kurviger’s server was lost.

So I (had to and did( stop,
started HERE in offline mode
and found back to a route to my destination, which I then reached without Kurviger.

a) (Easier) Is it possible to implement a CLEAR and IMMEDIATE hint in all situations where Kurviger is not able to (re-) calculate a route and therefor has to stop navigation?

b) (More complicated, I guess) Is there ANY chance to make it possible to implement any comparable feature to Kurviger, to create a route in offline situation?

Because in those situations first aim it “to find out” of the “desert” (before following a nice, scenic and curvy route) it would be completely sufficient to realize that only for the “Fastest” option.

I KNOW, usually it is much easier to prpose then to program: But, if HERE is able to do that, could not Kurviger a similar alogorithm jaut for these “emergency cases of lost in space”?

But, if HERE is able to do that, could not Kurviger a similar alogorithm jaut for these “emergency cases of lost in space”?

For the record, Cruiser platform (where Kurviger is based) is perfectly capable to do offline routing (process explained above).

Seems GraphHopper (used by Kurviger) has its limits in offline large scale routing, so would need to check also other solutions, like BRouter discussed here.

Coming back to your screenshot.

Looks like a similar issue I have posted in the other thread
Have you tried to:
a) stop start navigation?
b) stop start Kurviger app?

Agree, but having a recalculated route is condition for an continued navigation, what exactly I did not have in this case. So indeed NAVIGATION was stopped.

Hmmm, that’s true - could be the case.
(But effect on the road is the same …)

From my perspective it would be sufficient to have only one routing profile for a limited distance available in offline mode. Just enough to get you back to the route. No need for a full featured “curvy algorithm”.

Ecaxtly, that’s my suggestion - an “emergency offline fast route out of the nirvana”.

I am aware of this parallel topic - but HERE in my focus was (and is still) indeed the “emergency offline fast route out of the nirvana”.

a) Yes - did not help.
b) No, not in THIS case - was in a hurry, impatient car drivers following me and I could not stop to operate the device without traffic risk.

Any other app cases should be better discussed in their own topics.

for offline routing term, I understand your technical point of view. But on the "road’ as explained, all work done preparing a routing vanishes at the first pb. Unexpected road work, river out of bed, stones, accidents, etc… hundred of cases that sadly I had to stand even in Hungary, which is not the road of bones… If this function can’t be implemented, sorry to say that we can just make any twisty routing on a pc online and import gpx (directly or converted) in osmand, maps me magic earth, navigator, galileo, Locus, etc… Life is not a printed picture when on the way… I’m glad to have bought the pro version, even if this cheap amount will not help you pay taxes… But I don’t use no more Kurviger on smartphones and it makes me sad , because it could be just THE software ! I understand that a one person joib is nearly impossible mission, and more if all the software dvpmt and routines came in one direction which doesn’t allow a light offline routing algorythm inside smartphones. But I’m french so time to time, I come back asking hahahahaha “L’espoir meurt en dernier”

Übersetzt mit DeepL:
As much as I would like to have an offline routing, I don’t understand how to completely get along with the app without it.
Also it happened to me already often that there was a detour or something similar, then I stopped briefly at the side and looked for myself on the map a way…

Actually no need to convince me about any advantages of an offline solution.

After all I am the developer of Mapsforge + VTM offline vector map libraries!

Strange is how many prefer online maps in Kurviger, instead of offline ones…

not the same population. Offline is for travellers and more offroad or far countries . Offline is a necessity, as long as you travel out of weekend sor sunny european trips… And there’s still a market for it…Not big but we are a lot to be able to pay a good price for it ! ( not a licence, for same reasons). I’m using graphHooper to make around trip by Russia Georgia, Armenia, Turkey etc… Works well ( and the now 80 points lakes it easier), but lots of single trails can’t be defined, even if they are seen on the OSM … Still dreaming of a simple app where you just draw your routing on the map screen and it converts in GPX. So it’s up to you to go through a forest, cross a small river, then take a highway, etc… It will allow to be in/out of topo maps and general ones. Loading and working on small topo areas is not realistic… Because on the way, I will have changes, discover some places,etc…( same reason why online routing is not a “'real world” way) and how use topo areas for a 12000 km trip ?