Let’s not move away from the discussion’s purpose, what are the most useful start options.

When be away from route, navigation always asks for rerouting, it’s fundamental workflow.

When be near the route, can cancel rerouting at start, resume route & continue navigation.
There is no need to do reroutings for small stops / deviations & risk serious route changes.

When be away from route, navigation always asks for rerouting, it’s fundamental workflow.

When be near the route, can cancel rerouting at start, resume route & continue navigation.

Currently v.1.13.5(beta) when start navigation away from route it looks like this
(with automatic rerouting enabled) 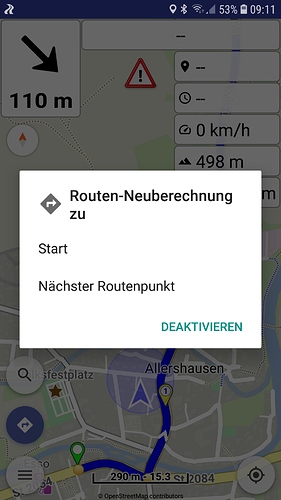 So we have the choice between

Do you mean that disable should be replaced by resume ?

I replaced it with “Cancel” so that can skip that rerouting action, resume navigation on your own and automatic rerouting continues from there. So workflow can be more flexible based on user preference.

I did some testing with Kurviger 1.13.6 (Beta) around my home base, to simulate this situation:

My concern is the following situation:

At a break along the route, I would stop navigation and maybe even close the app.
My position may be 100m away from route.

The “flexible version” (nearest waypoint) behaves very nicely.
If 100m away from route, hit cancel and navigation continues as soon as you are back on your route.

I think in most cases, you would start navigation at the exact place where you left your bike.
What do others think?

Edit 2:
I think, I had such situations in the past e.g. at a gas station:

More buttons usually are not nice, they complicate UI and implementation.

Can always stop navigation and restart it anytime later.
Now can cancel rerouting at start & so “resume” route.

So resume already exists in some way, only strict navigation has its own rules.
It’s difficult to bend them & want making it flexible again, defeating its purpose.

Here navigation is stopped i.e. the symbol (in the red circle) is not blue anymore.
I usually do this at any pause of the route e.g. at a gas station.

I always take it off and charge the phone on the bike.