It seems this is currently to be done by importing twice ? Correct ?

And than by .kurviger file transfers the (blue dot) info waypoints are lost.

1. Waypoints. > Overlay or routing or both or none

2. Route. > Overlay or routing or both or none

3. Track. > Overlay or routing or both or none

There can only be selected one single overlay @ imports ( and 1 routing ref of course)
I expect to show 2 overlays by a single file gpx import.
trk + wpt overlay.
Do not know what the web imports. Did not test. Prefer the app use.

So it is about overlay more GPX elements (wpt, rte, trk) during the import.

Now there is the automatic or only one single selection, as with routing.
For the overlays it could be useful to overlay more or all GPX elements.

But to avoid filling the list with every possible combination,
we could add an “All” option to overlay the whole GPX?

Just try and test this with the short sample file Emux.
Of course, you decide how to present this in the best possible way.
Both info wpt’s and trk overlay are quite discreet but sure useful.
Route lines however are (imo) a bit disturbing and mostly not desired.
I suspect that the routelines are rather rarely displayed on the map.

The easiest change that can be made without complicating (more) the interface
is to change the overlay trk option into overlay trk + wpt option.

I use the GPX import quite often to import POIs (e.g. mountain passes). So I have to take care to set “Routing” to “None”, otherwise my route will be overwritten : 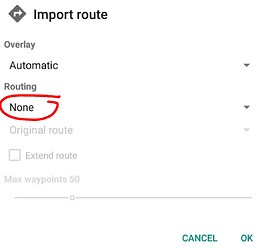 Would it be possible, to set “Routing” to “None” as default, if an GPX containing only waypoints (no route, no track) is selected?

The GPX has not been parsed yet.

Sorry for my late feedback (due to illness).
This would help for my use cases (I import GPX as overlays in most cases) - but other users might judge this different …

Do you mean changing the UI based on GPX content?
It is not possible at the moment.

works well, thanks for the implementation