How to write xml based render themes to style maps:

OpenAndroMaps with Elevate map style and its map groups / layers. 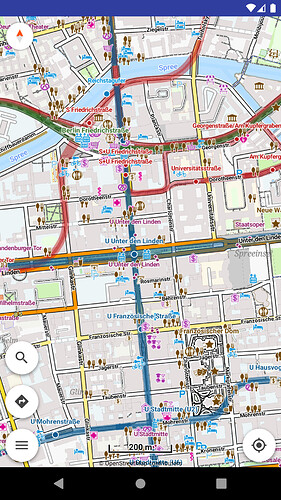 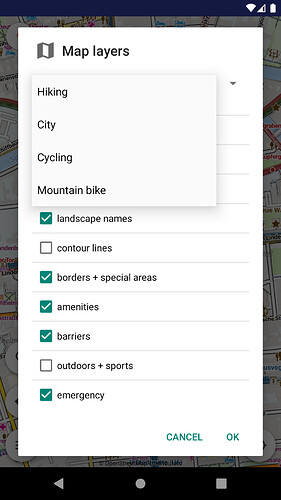 Yes, thanks. It is already (and still

Sorry, my time does not allow simultaneous work on the app and the map style.
The map styles belong to community and all users to improve and update them.

The Elevate map style of OpenAndroMaps is improved and updated constantly.

It is already (and still

This will be simple. Also it would be nice if the map style improvements
by the users could be integrated into the default map style in the future.

Available for testing in Kurviger 2.0.7 (Beta).

I really like this feature, i never knew about map styles!

This will be simple. Also it would be nice if the map style improvements
by the users could be integrated into the default map style in the future.

Simple … not for everyone

That was easier than I thought before (just remove peaks from mountain_passes layer), so I tried next step: Separate layer and other symbol for mountain peaks.

Having a look at Sella round only mountain passes are shown - clear view: 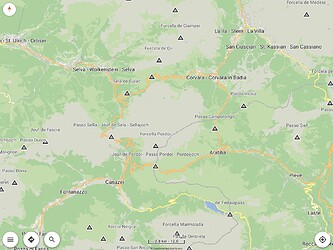 After enabling layer “Mountain peaks” peaks are shown by blue dot - not so clear view: 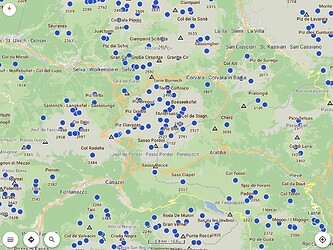 The Name and height of the peaks I could enable on map, but no icon was shown.

I did not yet understand how I have to add a new file (has the symbol path to start with “assets:”, “file:” or “file:/” ? Or even an other suffix?

Nevertheless there is a (small) success: I could disable the peaks / make them switchable separately and give them an other symbol (but just one which was already there)

Perhaps someone has an idea - also comments from other users are welcome, let’s save the time of @devemux86 and @boldtrn for more important / more difficult topics

Thanks again to @devemux86 for implementing external map styles and giving hints concerning that topic!

So, as a first result, from my point of view, proposal for the integrated style in the future could be:

Attached you find the style ZIP, but be careful: Using it might cause unintended behaviour, test depth is extreme low. Of course feedback is welcome:
PeaksBlueDot.zip (428,4 KB)

Thanks for the detailed instructions!

(the prefix “assets:” uses resources included in the app)

You need to use the “file:” prefix to use external resources.
Then xml must be at the root next to [patterns, symbols, textures].
(the “shaders” is not needed)

proposal for the integrated style in the future

There is already a relevant suggestion, although without answers from users:

You need to use the “file:” prefix to use external resources.
Then xml must be at the root next to [patterns, symbols, textures].

Thanks for the hint - although this was the same in an other sample from OpenAndroMaps, I did not see that (and might not have seen furthermore

)!
So I modified it and added a modified symbol for peaks (triangle with black border and white fill) and used it - works:
PeaksWhiteTriangle.zip (428,9 KB) 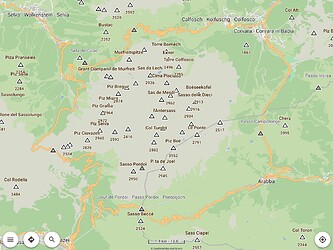 Oh, it’s fantastic!
I have tried to load this style, seeing that in the layers of the map it looks you can choose and it works perfectly.
I think it would be a very interesting option to put it in the ‘default’ style

Inspired by @rumbrummer (thanks!), I decided to slightly modify the default style. I want to add objects tagged with Historic=ruins to the Tourist attractions layer. Indeed, it was not difficult, and it worked! I just copied the Castle section and changed the name to Ruins (I left the icon because the adequate one is not readable).

But I have noticed that objects tagget as Ruins appear on a different scale than Castles (> 15). Changing entries in the style file has no effect. So I guess it depends on the structure of the map? Which may also explain that not all such objects appear at all. Or is there a trick to force these objects to appear earlier, along with the all attractions (scale > 10)?

In the Locus map forum you find some very active theme developers.
I think that you can get the necessary cooperation or good advice there.
Just ask, after all, it’s about identical vector base maps.

Working in map styles is easier on the computer with (desktop) Cruiser.
Use the Reload (F5) function with map style changes.

In Kurviger 2.1.11 fuel stations and charging stations have separate icons - but the difference is hardly to detect, especially on a smartphone:

As a first step I modified a style where I just changed the color of the charging station to dark green:

Of course you can apply any other RBG color by choosing an other hex code instead of #0e600e (see e.g. HTML Color Picker).

That was easier and faster than I thought:
I added an separate layer for charging stations just by modifieing SeparateChargingStation.xml. For details compare versions V0 and V1 - some languages might have to be reworked, especially the greek one 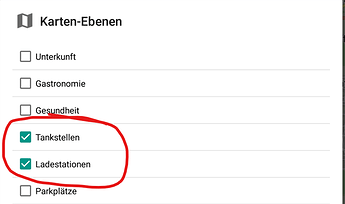 Thank you so much for this tip! I thought about replacing the icon, but I would never think to edit the icon in… a text editor on my phone

I even used the color you suggested, because it is perfectly suitable. Thanks.

I added an separate layer for charging stations just by modifieing SeparateChargingStation.xml.

It is implemented in the new Version, so no need for an external style any more: