since I updated my pro version of Kurviger to 1.7.3, the app doesn’t start up anymore! The only thing that happens is that the screen turns white, and then the app fades out again. The same happens with the shareware version which I tried after I noticed this failure …
Greets
Etti

Sorry for the inconvenience!

Version 1.7.2 worked correctly? Did you try uninstalling the app and install it again?

That’s strange, there is not anything in Google Play Console from Sony Xperia Z devices.

Did Android asked you to submit some error report?

Hi and thanx for your interest in my problem!

… no, there was nothing like an error report, the app just doesn’t start…
… and yes, I uninstalled and reinstalled both, the Kurviger Pro and the Kurviger sharware version, no changes, both do not start at all and do not give any messages …
When I downloaded an older Kurviger shareware APK (Version 1.6) and installed it, it worked flawlessly.
It would be ok for me to have this old Pro version running for a while, but 1. it doesn’t solve my problem and 2. I don’t know where I can get the Pro APK Version 1.6 .
Last but not least I can’t definitely say, which version I had before the last update of Kurviger Pro (1.7.3), but the version I had worked fine in January, so I gues it has something to do with the last update version of Kurviger.

It’s difficult to debug without reproducible workflow or a log to study.

I’ll sanitize some core things in libraries and see what happens.

the last running version on my mobile definitely was version 1.7! (I had a look at my last backups and it shows me the installed version of apps.) I tried the 1.7 Kurviger shareware app, an it runs smoothly …
So there is an issue with the step from 1.7 (running) to 1.7.2 (not running) …

Can you install an OpenGL utility app and post its report for your device?

OpenGL Extensions Viewer for Android displays the vendor name, the version, the renderer name and the extensions for OpenGL ES 1.0 to ES 3.2 and Vulkan. From the makers of the famous OpenGL Extensions Viewer on PC and Mac, the Android version can access each extension documentation, renderers capabilities. Ideal if you are developing application for Android, CPU information, Android OS revision are also reported. Main key features: • Reports Android version, model and CPU. • Reports OpenGL ...

Hi,
I’ve installed this “OpenGL ES Extensions”-viewer, but I don’t see any possibility to send you the report …
How can I do so?

If you can take a screenshot of the report or just write here the values for:

I succeeded making a screenshot, here’s the first page with the information you requested …
Hope it helps solving the issue … 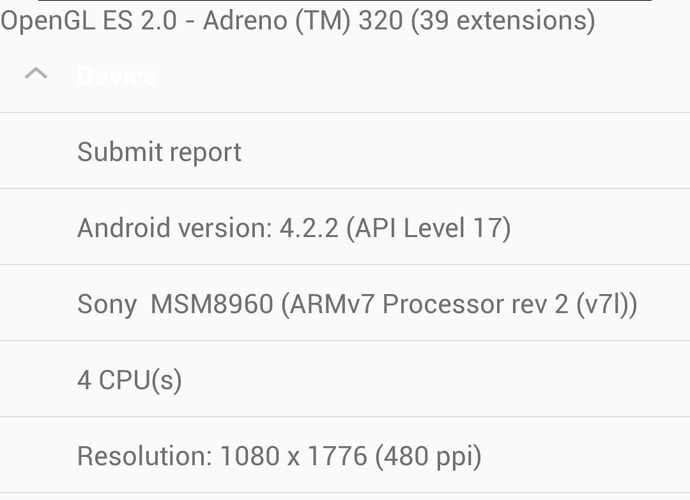 Thanks for the info!

Next version will have improvements and hopefully work again on your device.

@Etti can you check new Kurviger 1.8, how both Free and Pro work on your device?

no, both versions do not work, same behavior than in version 1.7.3 …

If you don’t have a newer device to use the app, we can offer a refund, see here for the details.

Android fragmentation hurts all of us and we’ll have to reconsider anyway the min version requirements in order to continue providing a seamless experience.

Sony Xperia Z seems upgradable to 5.1.1 (Lollipop), why keep it to such low Android version?

Hi,
… never change a running system …
… and no, I don’t want a refund, I just wanted to support a very interesting development …
Possibly I should take the chance to upgrade my system, but will it solve my problem? Maybe it’s a hardware problem, who knows … I’ll have to think about it …

Thanks again for your support

There are two sides to this. While on one hand, an update could decrease the performance of your device, on the other hand it will usually increase its security. Android 4.2.2 was released in 2013. 5.1.1 was released in 2015. Also many apps nowadays won’t be available for Android 4.X anymore.

Possibly I should take the chance to upgrade my system, but will it solve my problem?

It might. We are not sure why the app doesn’t work on your device. We can’t reproduce the issue. Chances are that the issue is the old Android version.

you’re right! I’ve updated my Android to version 4.4.4, and everything’s alright now, both the shareware as well as the pro version of Kurviger work fine! Now I will do the full step and take the last available Android version, I will see what will happen then.
As I said before, never change a running system, but if there’s an issue, you should act!

Thanks a lot for your efforts!

I’ve updated my Android to version 4.4.4, and everything’s alright now, both the shareware as well as the pro version of Kurviger work fine!

Very nice that got a newer Android and the app working again!

I wholeheartedly disagree and I am kind of worried for your - and possibly your family’s - internet safety. You do update at least your browser and stuff, right?

Kurviger 1.8.1 was released with improved OpenGL on Android 4.2, should work nicely now.